Our core mission is to improve the lives of anyone affected by cancer, including those with a diagnosis, carers, family members and bereaved relatives, by enhancing emotional, psychological and physical well-being.

Our history is a culmination of a series of events. Over 20 years ago, it was seen that West London needed a cancer support service – somewhere for anyone affected by a diagnosis of cancer could visit for information, advice and support and West Middlesex University Hospital NHS Trust launched its first major fundraising campaign under the banner of the Pulse Appeal. Visits were made to similar centres around the country to gain an understanding of the viability of the service and its ongoing funding needs.

In 1999 the cancer care centre gained its name, we wanted it to be accessible to our diverse community.  The local connection is that the first Mulberry trees were imported to Britain by our neighbour at Syon House, the Duke of Northumberland. The tree is dedicated to the Goddess of Wisdom, Minerva. Most important for us was that the mulberry tree can regenerate through it branches and leaves. So there is a connection to our work.

The Mulberry Centre Appeal was born; Fundraising continued and building started in 2000. In 2001 the dream became a reality and the doors were opened for the first time. After 4 years, The Mulberry Centre moved from being a subsidiary charity of the West Middlesex University Hospital Charitable Fund, to be a charity in its own right.

On 1st August 2005, The Mulberry Centre became an independent charity, with its own Board of Trustees. This development allowed further scope for funding applications and an easier route for donations. Ties with the West Middlesex University Hospital continue to be strong, but the Centre gained strategic control over its future development and partnerships.

Today, The Mulberry Centre is a well-established resource in West London and has over nearly two decades received many thousands of visits to the Centre from those affected by cancer.

Since it first opened its doors in 2001, The Mulberry Centre has grown and adapted its services to meet the needs of the people we aim to serve. As people are living longer with a cancer diagnosis, we recognise that their needs may change over time. It is not just the physical manifestation of the disease, but the emotional and practical impacts that we are able to respond to.

We aim to deliver a range of information and support services to all people affected by a diagnosis of cancer: to the cancer patient, friends and family, carers and those bereaved by cancer. Services include complementary and relaxation therapies, ongoing one to one support on a drop-in basis, counselling sessions and support groups, plus a wide range of workshops. The combination of information, support, self-management and relaxation helps people feel in control; it helps them to make the right decisions to manage both the physical and mental trauma of a cancer diagnosis, treatment and recovery.  Find out more here.

Our community engagement activities forge links with a broad range of relevant health and community organisations and targeting and approaching sections of the community who have tended not to be active users of The Mulberry Centre. Further details here.

Longstanding relationships with a wide range of health professionals, public bodies and voluntary organisations also help us to achieve and sustain our aims.

How we spend our money

There are 5 main ways in which we provide person centred support to people affected by cancer at The Mulberry Centre: Information and drop-in support, counselling, therapies, welfare and benefit support and workshops. In addition to the support that we offer at The Mulberry Centre itself, we also hold information desks and events in the community. As well as informing people about the support offered by The Mulberry Centre, our community engagement work is an opportunity to raise awareness about the signs and symptoms of different types of cancer and ways in which people can adopt preventive measures (e.g. diet, exercise, giving up smoking, attending routine screening) to lessen their chances of developing cancer.

In order for us to be able to deliver this wide range of support and information, we need to raise the funds and have a small fundraising team to do this.

Finally, underpinning everything we do are the activities that relate to good governance.

The costs of delivering all these elements of our work are outlined in our Annual Reports.  Click on the links below:

The Mulberry Centre has a small team of paid staff who are involved in all aspects of the delivery of our services. Our counselling and therapies and group activities are delivered by a wonderful team of volunteers who are led by part−time professionals. We also have strong governance with a Trustee body of 10 who bring a wide range of expertise and skills (health, accountancy, legal, fundraising, business and community). 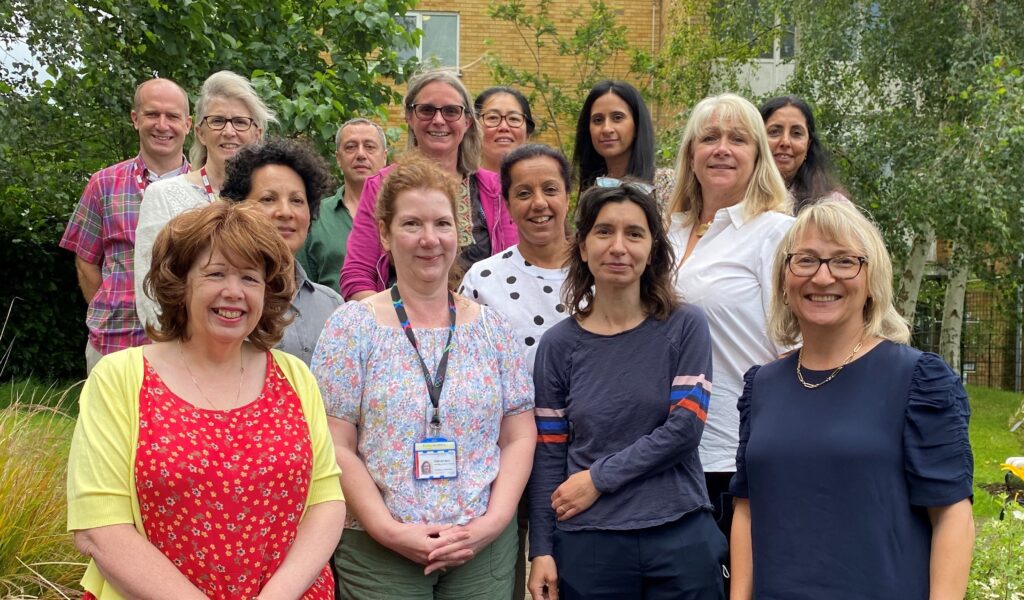 Find out how we are funded

In March 2020, the Complementary Therapy team won a prestigious Macmillan Volunteers Award for their commitment and determination to improve the lives of people affected by cancer.

In 2010 we were chosen as a beacon site for their Macmillan Environmental Quality Mark award for the excellence of our facilities; this was awarded again in 2012, 2015 and in November 2018.