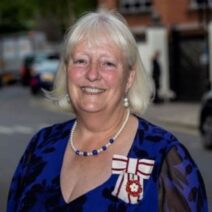 I am honoured and delighted to have become a patron of The Mulberry Centre.
My connection goes back to the very start of the conception of the centre on the West Middlesex site in the mid-1990s, when I was a Senior Nurse at West Middlesex and had two people very involved with its development who I am sure many of you know, Jane Kelly and Grace Gibbs, who were my bosses.

Over 20 years ago with others I climbed Ben Nevis to raise money for the Centre. Although Jane, Grace and I have remained in contact from a distance over the years we reconnected in person when I was delighted to have been present at Westminster Abbey in my role as the Vice Lord Lieutenant of Greater London at the presentation of the Queens Award for Voluntary Service for The Mulberry Centre, such a well-deserved accolade.

I was privileged to be asked to be Patron and thrilled to accept and The Mulberry Centre is the first organisation for which I am a patron, so makes it very special indeed.
I look forward to supporting you in any way I can over the coming years. 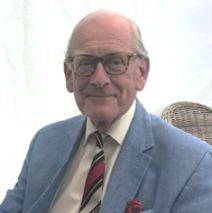 When The Mulberry Centre was awarded The Queen’s Award for Voluntary Service, I visited the Centre as the Deputy Lieutenant for Hounslow and was immediately enthused. Everyone I met was so friendly and I knew I was in a place fulfilling so much and providing such support and care in the community.

I come from South Yorkshire, worked as a Chartered Surveyor in the City of London for 45 years and was the Deputy Lieutenant of Hounslow for seven years. I was a member of the Reserve Forces for 35 years. I enjoy ocean sailing, choral music and international affairs.
I look forward to supporting you.