Men’s Health week is in June

Men’s Health Week falls in June. At the Mulberry Centre men’s health is very important to us and we hope that you will find the following article informative. Our Men’s health group is restarting at the end of June, a link with more information can be found at the bottom of the article.

Below is a list of the most common types of cancer affecting men, the general symptoms to look out for, what you can do to minimise the risk and how we can help.

The three most common types of cancer that affect men, as taken from the Office for National Statistics’ Cancer Registration Statistics 2017, are:

Every year over 41,200 men in the UK will be diagnosed with prostate cancer, which is twice as many as the next most common type and an estimated 1 in 9 men will develop the condition. Older men, men with a family history of prostate cancer and Afro-Caribbean men are more at risk.

The following are common symptoms, but some men will experience no symptoms at all. For this reason, screening is advised for all men aged over 50 and they are entitled to have a PSA test, which can take place at your GP surgery.  Having a PSA test can be very reassuring if the results are normal and, importantly, can help find some cancers at an early stage. For people without any symptoms it is only through this routine screening that they can be diagnosed and treated.

What will the GP do?  They will conduct a PSA test. This is a blood test that measures the total amount of prostate specific antigen (PSA) in your blood. PSA is a protein produced by normal cells in the prostate and also by prostate cancer cells. It is normal for all men to have a small amount of PSA in their blood, but a raised PSA level may show that you have a problem with your prostate, and possibly prostate cancer.

We all know about the dangers of smoking and that it is the main cause of lung cancer. Lung cancer incidence rates in men peaked in the late 1970s and since then have decreased by around 48%. But it is still the second most common cancer in men after prostate cancer, with around 21,900 cases diagnosed in the UK each year.  And we all know that you don’t have to have been a smoker to get lung cancer, which is why it’s all the more important to know what symptoms to look out for.

The following are common symptoms of lung cancer and if you have any two of them, or have had any one of them for longer than a month, you should speak to your GP:

The third most common sort of cancer in men is bowel cancer. This cancer is more common in older people, with more than 80% of bowel cancers diagnosed in people over 60. The bowel includes the colon and the rectum, so these terms are somewhat inter-changeable. Over 20,000 men receive a new diagnosis of bowel/colo-rectal cancer in the UK each year.

If you took 100 people with bowel cancer, then only 5-10% of those people have developed bowel cancer because of a faulty gene. The rest were probably caused by a low fibre diet; some by a lack of exercise; some by excessive consumption of alcohol (more than 4 units a day) and some are caused by being overweight.

Common symptoms of bowel cancer are:

More generally, if you notice any of the following changes in your body, particularly one that continues for more than two weeks, consult your GP:

Cancers are usually treated by surgery, drugs, radiotherapy and chemotherapy. Rates of survival vary dramatically, as do recurrence rates.

The Mulberry Centre can help, whether you have just been diagnosed or are at any stage of your cancer journey. We offer emotional support, counselling, complementary therapies and workshops on a variety of relevant topics as well as more social activities. Our men’s group will be restarting at the end of June. 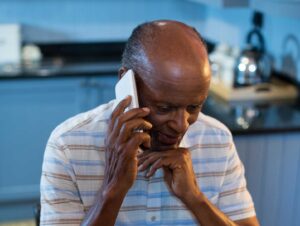 If you want to know more, speak to us about your diagnosis or that of someone for whom you are close to or caring for, or you would like to hear more from someone about cancer, early diagnosis and treatment you can call us on 020 8321 6300 or email us on talk@themulberrycentre.co.uk and someone will call you back.